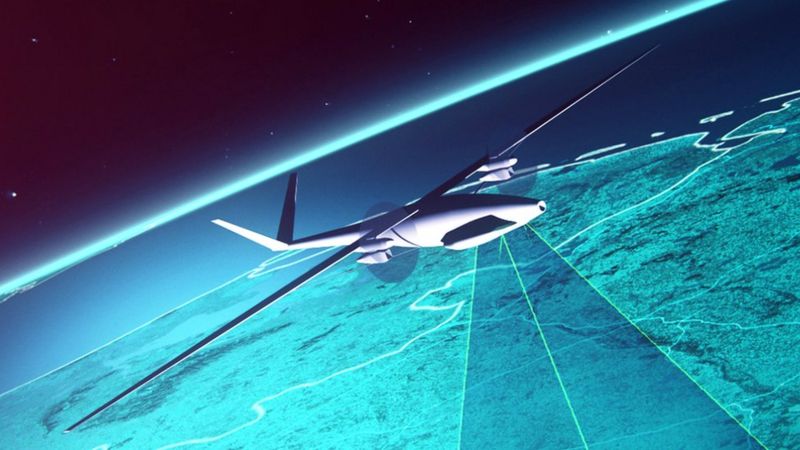 Stratospheric Platforms and Cambridge Consultants have announced that they plan to beam 5G signals to the public via drones that can stay airborne for nine days at a time, with the ability co over the whole of the UK with about 60 drones. The two UK firms want to use antenna-equipped aircraft powered by hydrogen to deliver high-speed connectivity to wide areas.

The Cambridge-based companies are already backed by Deutsche Telekom and say that they would run the survive in partnership with existing mobile operators. Deutsche Telekom hope to trail the technology in rural southern Germany in 2024.

Cambridge Consultants designed the antenna for the Stratespheric Platforms aircraft, which is designed to fly at an altitude of 20,000m (65,617ft). The organisation say that they have successfully tested beaming a lower-bandwidth signal from a plane flying at a lower height.

However, the drone required is still on the drawing board and would need to be tested with an emission-free hydrogen fuel cell and 5G antenna on board. The chief executive of Stratospheric Platforms, Richard Deakin, says using hydrogen fuel cells is a superior solution. He comments:

“This is a very high-density energy source, which enables use to produce a huge amount of power for long periods of time. Terrestrial masts are extremely expensive to install. With our system, each aircraft will replace at least 200 masts.”

Mr Deakin is a form chief executive of NATS – the UK’s National Air Traffic Control Service, so is well aware of what is involved and says that the initiative is already talking to air traffic control services across Europe.

For now, the biggest challenge is funding. Despite Deutsche Telekom’s involvement, the two British firms need more money if they are to offer connectivity from the stratosphere within four years.

Let Us Know What You Think

Do you think that a network of drones could provide a 5G solution? Let us know via our social media channels!