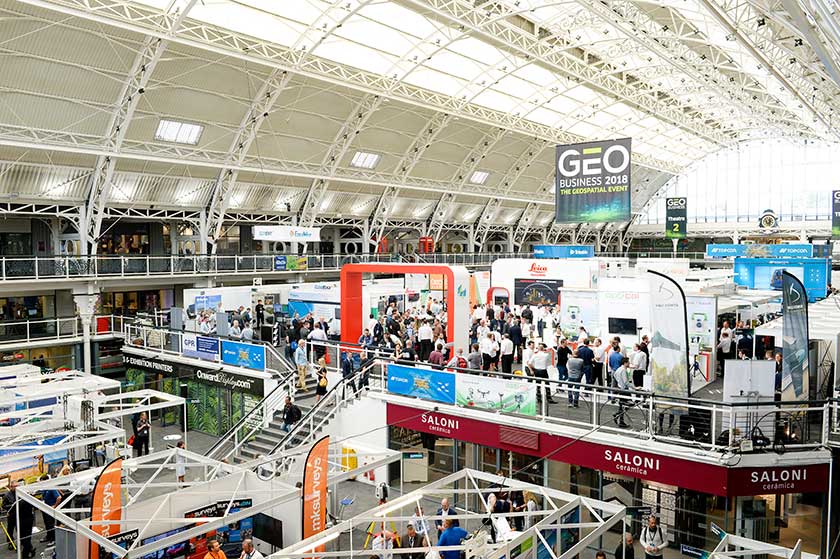 Visitors of the event were able to network face to face with various exhibitors who were displaying the latest in the geospatial industry including GIS data capture, laser scanning photogrammetry, UAV’s, remote sensing, GPS and satellite positioning plus much more.

The arrival of drones equipped with cameras, GNSS, LiDar, multi spectral and other sensors brings with it a whole host of opportunities for the geospatial industry, hence the reason for the dedicated ‘Drone Zone’! Geomatics and geospatial professionals are already actively utilising drone technology and seeing the benefits of being able to inspect key infrastructure sites, or map complex environments with exceptional speed, accuracy and cost efficiency. The Drone Zone included various key industry professionals such as ARPAS-UK, COPTRZ, iRed, Heliguy, Drone Pilot Academy and many others.

Across the show floor, there were various seminar programmes being held within open theatres. Jess attended the UAV seminar sessions which were held throughout the day. Throughout this session, it was clear that UAV’s are significantly benefiting sectors such as architecture, mining, highways, emergencies and the heritage sector via the reality capture process.

DJI – Overview Of The Drone Industry

The session started with DJI providing an overview of the drone industry and the market for drones. Tobias Wentzler, Enterprise Business Development Manager for DJI, described how the full potential of drones is leveraged by fusing other types of existing or emerging technologies such as gimbals, affordable high-quality cameras, post processing kinematics software and drone tailor-made photogrammetry software. Tobias explained how the construction, public safety, infrastructure, energy and agriculture industries are the first successful sectors to use drones for surveying.

He also addressed the ‘Drone Rulebook’ which was spoken about in the news last week for Europe’s Drone Community which stated that DJI drones were to be subject to the same rules and regulations across all member states. He revelated the following Implementation Timeline:

Various other seminar sessions were held such as Jim Morris, from Drone Surveying, describing how the advancements in drone technology has enabled the construction world to capture large amounts of accurate data in a very short space of time. Combined with traditional surveying on the ground, Jim described how you can create accurate datasets that can be used to measure stockpiles.

James Dunthorne from ARPAS-UK wrapped up the day with describing how drone-based photogrammetry is being used in the geospatial industry such as topographical land, heritage, P-Way Railway surveys and 3D bridge inspections. He described the clear benefits of utilising drones such as improving health and safety, improving security and it being a faster and cheaper way of working.

All in all, the day was a fantastic way to network with our partners whilst also learning all about the benefits of drones being used within the geospatial industry.