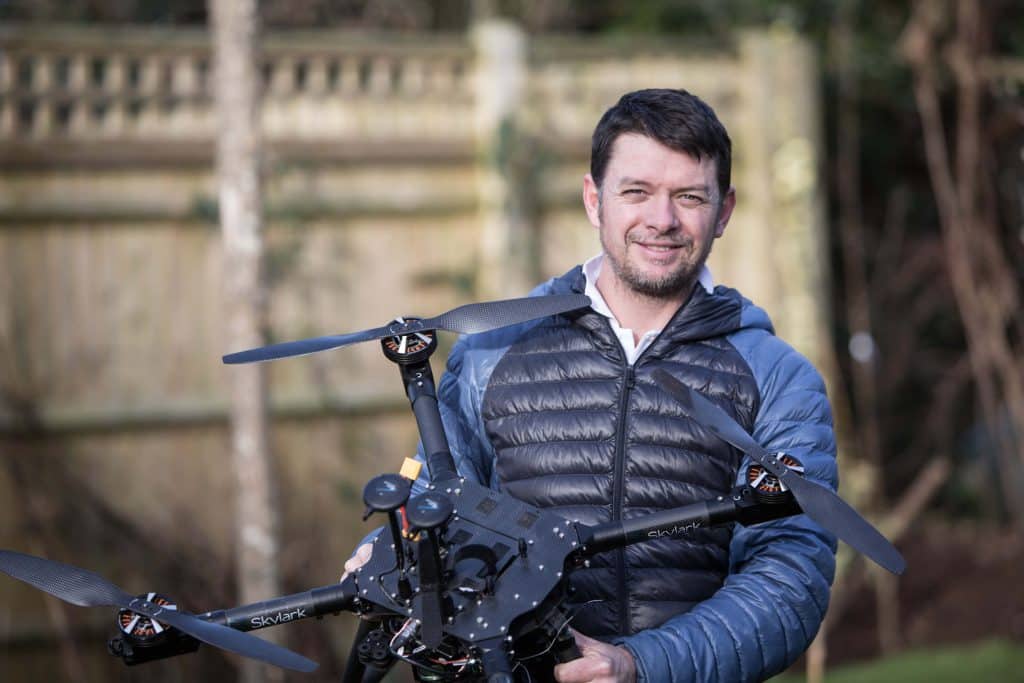 Commercial drone operators expect to take some spectacular aerial images, but few would hope that their footage would be seen by nearly ten million TV viewers each week.

Now a regular series, Coverdrone takes a look at one of our clients, Fergus Kennedy, owner of Skylark Aerial Imaging, who has lifted his drone business to new heights thanks to a high-profile partnership with a mainstream television company.

Based in East Sussex, the company offers a range of commercial drone services – from aerial photography for property agents, to commercial films, agricultural surveys, 3D imaging and much more.

The Great British Bake Off

For the last two years, the hit BBC1 show, The Great British Bake-Off, that is filmed at Welford Park near Newbury, has called upon Skylark’s services for some dramatic overhead shots. Fergus and his team has provided coverage of the elegant private home set in the estate’s gardens, the bake-off marquees, and the key show hosts.

He said: “I was lucky enough to know one of the cameramen on the set at Bake-Off. The production team had suggested getting some more unusual angles, so a drone was the obvious answer.

“It was a pleasure to meet the presenters, who are all great fun and full of energy. I even got some cake!”

“The show is a huge operation with thirty or forty people involved on the crew most days. There’s a lot going on, so having other people to oversee health and safety issues associated with flying an unmanned aircraft is a great advantage.”

“Sometimes it’s just myself and an observer. For TV work that’s a minimum. I fly the drone and someone else controls the camera. A two-man team allows you to perform much more complicated shots, and that’s exactly what Bake-Off wanted.”

“At the production set we were able to call upon some of the BBC’s technical crew to take on some responsibilities, so the cooperation was fantastic and the end result is the breath-taking images that you see on the show.”

Skylark boasts an impressive stable of drone hardware, including a Zero UAV Highone quadcopter, an Inspire 1 RAW and a DJI S1000 Plus. With varying camera options, they are used for different assignments. Having full, comprehensive insurance cover for such vital equipment has always been a priority.”

“Getting into the drone industry excited me, but the thought of losing or damaging my kit terrifies me,” said Fergus. “I call or email Coverdrone whenever I need up-to- date advice about policy cover, often on my way to a new job. The response is always quick and efficient. That means that I can concentrate on planning the visuals, confident that I’m covered from a risk perspective.”

“It wasn’t straightforward when I started my training, but Coverdrone now offer a great package for beginners. I’d definitely recommend that drone operators do a recognised qualification and take all the advice you can from the people at Coverdrone.”

Fergus has extensive experience as a biologist, under-water film maker and as a still photographer. His travels have taken him around the globe, with particular favourites the Arabian region and the Red Sea.With great exposure gained for Skylark Aerial Imaging recently, the possibilities of other overseas TV, film and commercial drone work is always a possibility. That’s not a problem, as full Coverdrone policy holders enjoy worldwide cover, and that includes transit time.

“A job near Tonga, in the Pacific, filming Humpback Whales is something that I have always dreamt about. That would be perfect,” added Fergus with a wry smile…

If any Coverdrone clients have unusual stories to tell about their drone businesses, please get in touch.